Posted on November 7, 2017 by videostrolls

We’re excited to be showing a small collection of scary films about landscape as part of The London Fortean Society’s Haunted Landscapes conference “Folklore, Ghosts and Witchcraft”

We’ll be showing some spooky films by Adam Scovell and Lee Kern, while the rest of the day promises authors, experts and researchers discussing ghosts, strange beasts and magic. From haunted folk songs to 3000-year-old chalk giants, phantom black dogs, Albion’s Goat God and the Queen of the Fairies.

Book your ticket for this full day conference and learn that this green and pleasant land we abide in has dark, strange and uncanny other side.

Paradise Lost but not forgotten

Andy Howlett is in the process of making a film about the loss of our iconic Central Library and the Birmingham architect John Madin, “Paradise lost history in the unmaking” . He will be presenting clips from his film and examples from other artists, Emily Wright and Olivia Sparrow. The presentation will pose the question – What can we do collectively to save Birmingham’s C20th heritage?

This event is taking place in the John Lewis Community Hub which is on the top floor of the store.

Tickets are free but places are limited so please book here to avoid disappointment: www.eventbrite.co.uk/e/paradise-lost-but-not-forgotten-tickets-36144016727

We’ll be showing a selection of short films with a literary bent, about amorous feelings for library buildings and of poets and the places they write about.

Films include:
Robey by Owen Davey, Craig Bilham and Tim Wells
The Battle of Maldon by Tom Wood
Paradise Lost: History in the Un-Making by Andy Howlett

The screening will be followed by a walk led by poet and essayist Edmund Hardy who will lead a mysterious plunge into Stoke Newington’s byways and long lost ganglands.

Birmingham’s Flatpack Film Festival has just announced its programme for next month and we’re frothing at the mouth. We shall of course be attending and we’re thrilled to be joined by one of our heroes John Rogers for a screening of his latest feature film London Overground. The film follows Hackney-dwelling writer and psychogeographer Iain Sinclair (no introduction needed) on a 35 mile circular yomp around the London Overground, joined by fellow travellers including filmmakers Andrew Kötting and Chris Petit. Sinclair describes the ‘Ginger Line’ as the ‘spin-drier of capitalism whirling bank notes around the city – a real moment to look at this city of unreal money’ where a new city is emerging. The recently completed Overground circuit provides ‘a tiny little map of what is happening now’ in London.

In support will be One Square Mile by Sam Meech and Chris Paul Daniels. Playful and imaginative, the artists use a variety of film-making experiments and techniques to investigate a square mile sample of Salford, another city being reshaped in various ways.

John Rogers, Sam Meech and Chris Paul Daniels will be joining us for a short Q&A to round off what promises to be a great little event as part of an even greater festival.

Posted on February 9, 2017 by videostrolls

Film still from Emily Richardson’s ‘Aspect’, which will feature in the programme

We’re really pleased to have been invited to Alchemy Film & Moving Image Festival in Hawick, in the Scottish borders, to curate a programme of artists’ films on Sunday 5th March. The programme is themed around landscape, folk and sunlight and features some of Britain’s leading moving image makers, with films also from Ireland and the US. Alchemy is a festival we’ve respected for many years and we’re happy to be contributing.

The programme includes films by artists:

Artists Andrew Kotting, Rosalind Fowler and Theresa Moerman Ib will be present alongside Owen Davey (programmer) for a Q&A at the end of the screening.

We have also chosen Simon Aeppli’s excellent film Second Hand Daylight to feature in the Uncertain Territories programme, which will run on each day of the festival. Tickets and details can be found HERE.

Birmingham’s What I Think With

Posted on October 6, 2016 by videostrolls

Flatpack have invited us back for another evening of ambulatory entertainment, this time built around Tom Pickard’s 1991 film Birmingham’s What I Think With. This one-hour documentary follows poet Roy Fisher around various hidden corners of Birmingham, dragging a front door from the Handsworth home where he grew up. In support you will find a selection of short films and talks inspired by Fisher’s brand of topographical poetry, with a particular focus on the city’s neglected waterways.

We shall be joined by some special guests including visual artist David Rowan who shall be presenting material from his ongoing project The Dark River.

Part of Flatpack’s Birmingham On Film – a season of archive screenings and events exploring the changing face of the city. Expect everything from outdoor screenings, vampire motorcycles and Brumburgers to live music and rare archive TV. 16 Sept – 15 Oct. In association with the BFI as part of their Britain on Film initiative.

Posted on September 27, 2016 by videostrolls 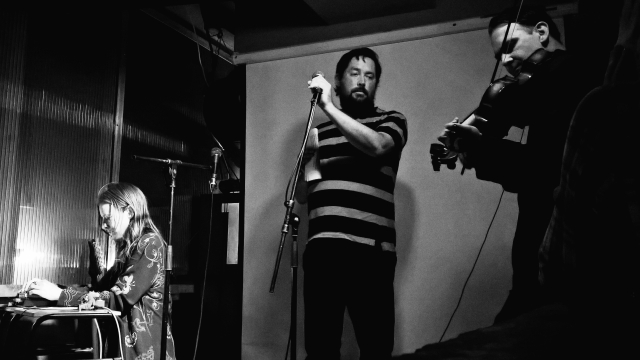 Join us at the Archway With Words book festival for a selection of new writings, readings and films by Michael Smith.

Michael Smith is the author of several novels (Giro Playboy, Unreal City, and Shorty Loves Wing Wong for Faber & Faber), but his work also explores how writing can enrich other media – he’s made an album of music & spoken word with Andrew Weatherall, written and presented critically acclaimed, poetic documentaries such as “Drivetime” and “Citizen Smith” for BBC4, as well as dozens of shorts for The Culture Show. More and more, he also directs his own films: experimental, literary pieces he likes to imagine as “video-poems.”

Michael will introduce and talk about some of his personal favourites, as well as giving us sneak previews of two new pieces – a film he’s been collaborating on with filmmaker Maxy Bianco, as well as reading from his new literary project, a piece about the mystery and romance of the seaside, and the first thing he’s written since becoming a dad.

This is the opening event for the Archway With Words literary festival and is followed at the same venue by a David Bowie night, so pffffff…

Posted in Uncategorized | Leave a comment
Blog at WordPress.com.